Kawardha is a municipality in the Kabirdham district in the state of Chhattisgarh. Much like the name, the place is an exquisite fusion of serenity and brisk liveliness that pervades the whole atmosphere. We reached at Raipur junction early in the morning, from where Kawardha is at a distance of another 120 kilometers. After enquiring a bit about the mode of transportation to our destination, we managed to board a bus going to Kawardha. Fairly crowded, we anticipated that the three-hour long bus ride would be a tiresome and an enervating journey, but to our surprise, the travel bolstered our spirits. The road – perfectly tarred without a single pothole stood better than the metros.

♦
I: WHILE IN KAWARDHA

The purpose of our visit to Kawardha was to screen films in the villages of the district but primarily, we wished to discover and know about the villages, to travel into the interiors, meet people inhabiting them and to record the multifarious stories of these people. The rich diversity of India ensures that engaging with people in any part of the country always leaves one with a multitude of experiences.

At the suggestion of our local contact, we decided to visit a village named Binarchi, some four and a half kilometers from the district. Meanwhile, we had to start inventorying our resources – projector, audio system, screen etc. ‘Electricity would not be a problem in Chhattisgarh!’, remarked one of our local contacts. The market town of Kawardha had three DJ shops in total which offer multimedia paraphernalia and after enquiring and negotiating with all of them, we finally settled at one. The shop owner was looking at us in astonishment when we informed him of our business in Kawardha. He told us that though people rent projectors once in a while for celebrations related to childbirth, the practice was uncommon. Our local contact assured us that they could conveniently arrange the speakers in the village itself which was a source of much relief for us. We were also informed that a person from the shop would accompany us to help with the handling of - but mostly to make sure that no damage is done to - the equipment.

We reached Binarchi at five in the evening by car. There was no other public medium of travelling as the villagers rely on their private vehicles to travel across the place. We were lucky that our local contacts arranged a car for us and saved us from another bit of annoyance. Walking through the village, we noticed a flurry of activity at a playground – some old men sitting under the tree smoking hukkah, small kids still in their school uniforms playing and running through the wide ground, cows returning back from the fields. This playground seemed to us the perfect spot to screen the film, easily accessible to everyone in the village. While Kapil, the boy who was sent to guard against manhandling of the equipment offered to set everything and our local contacts, who true to their words got us the speakers, we began interacting with the people.

All men and women were initially reserved, they began to open up after a little prodding – assuming a warm straightforwardness that we were thankful for. They told us about their families, the arduous labour they engage in as their means of survival, local traditions, harvest festivals, soaps they watch on television (some households had television at their homes which played free channels) and of course, the films they have watched. The kids flocked around us in curiosity and did not leave us until we clicked their photographs and recorded some videos.

We were engrossed in listening to the people, trying to jot down whatever we can so much so that we did not realize that it was dark already. Our local contacts informed us that they had sent the invites to everyone in the village for the film screening – ‘haka padwa diya’ - meaning one goes to every house in the village and informs the members about a public event that is going to happen. Having completely forgotten about the gathering, we were grateful to them. After connecting the laptop to the projector and checking everything in tune, we finally began the film – Bimal Roy’s Do Bigha Zameen - at eight in the night. We decided to screen the 1953 classic out of an expectation that the villagers, mostly engaged in agriculture, would relate to the overarching theme of the film. 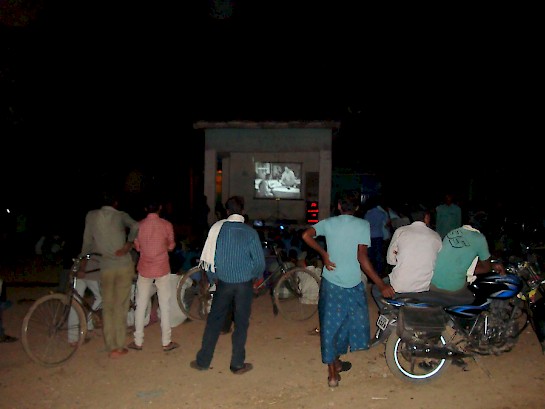 As expected, the kids had zealously occupied the places in the front, while many men kept standing at the back only to finally sit as the film resumed. Women, as they conveyed to us during our chats, would arrive and seat themselves in groups. The attendance must have been around sixty-seventy people who sat scattered as per their convenience. It was a satisfying experience seeing children laughing at the scenes of Kanhaiya, the child actor of the movie and women sniggering at the scene with depicts Nirupa Roy and Meena Kumari writing a letter to the former’s husband on her behalf. During the screening a man, possibly drunk and involved in some level of local politics, sneered at us for coming into his village with government propaganda. He sounded aggressive at a point but we were glad that nobody paid attention to him as if the film had alone managed to grip them. Some kids and women left in the middle but many men stayed on till the end.

The film ended at around ten in the night. Many people started leaving as soon as it ended and our local contacts were expressing their restlessness to go back to Kawardha too. In the ensuing commotion, it became difficult to strike any meaningful discussion. However, we did have a conversation with a small section from among the audience, who articulated a positive response to the film. A man among them remarked that he did like the film for the connection he could draw between his life and the story depicted in the film. Thanking everybody and after wishing them goodnight we packed our equipment and returned back to the place we were staying in in Kawardha.

We started the second day with a visit to an adivasi village. While discussing the idea with our local contacts, we struck a plan to visit the Bhoramdeo Temple - also known by the sobriquet ‘Khajuraho of Chhattisgarh’ - on our way to Bhairak, which was about 35 kilometers from Kawardha. The journey began at nine in the morning and after forty or so minutes, we arrived at the temple. Its sobriquet was well-earned: the architecture closely resembles the style of Khajuraho’s better-known site. We spent some time listening to the tales of the temple while admiring the beauty of magnificently carved rocks. After lunch at a local dhaba, we carried on ahead with the journey and saw ourselves descending deep down into a forest, which soon transitioned into a spread of paddy farms.

We were informed that the village had developed immensely during the last decade. Besides the perfectly laid out road, the sight of a medium school, a high school, a swastha kendra, and an aadivasi baal ashram seemed to validate this claim. The school playground would be an ideal venue, we thought and since we had ample time on our hands, we began strolling in the village. Spatially, the village had a scattered geography with a population of around eleven hundred people. The houses were located in groupings, all arranged at a distance from one another.

Next, we decided to pay a visit to the aadivasi baal ashram and the kids there too seemed shy and discreet. The girls however sang for us, told us how the TV had broken and that they watched movies on their mobile phones. The elderly grew rather nostalgic about the village of the yore when we inquired with them about the transformation of the village past few years.

It was time to now arrange the equipment but we learnt that the venue had to be changed for it was a holiday and the school was closed. The people sitting nearby, slacking at a small shop, suggested another venue – ‘sarvajanik manch’, they said. Kapil, the person accompanying the projector, had reached the village by himself and now we realized we did not have an audio system. Unfortunately no speakers could be arranged in Bhairak and we were petrified at the prospect of travelling back to Kawardha to get one. Luckily, somebody told us that a speaker could be found in the village adjacent to Bhairak, some two kilometers away and that eased matters for us. Our local contacts asked us to stay back while they went to check for the speakers. Meanwhile, the evening was turning windy and the sky assumed fiery hues of oranges, reds, violets and yellows. The screen refused to settle down with the wind tossing it down twice. Witnessing our misery, the village people were kind enough to get us two cables and helped us tie the screen rigidly to the floor and to the ceiling of the manch.

The children had already gathered, again occupying the places in the front. While we were just about to begin, we quickly ran from home to home to invite people once again. Our second screening of Do Bigha Zameen began eventually at seven-thirty in the night and as soon as it started, there was a power cut. All our plans could be thwarted and there was a sense of dejection on our faces. At this time, some youth from the village promptly rushed to the electricity pole to allay the situation. While these young men were trying to work their way out, we tried to arrest our audience with some music and dance. Children participated and soon people were singing ‘chal tu guiya re’, a folksong of the region.  Power came back and we continued the film. Soon, people were engrossed.

After the first half of the film, the children, including the kids from the baal ashram, left. It was way beyond their normal sleeping hour. The men and some women, however, decided to stay. However, towards the end of the film, it started raining. It was unexpected but fulfilling to see that some people still remained put. When we asked them after the film if they would want us to come back with another film, they seemed enthusiastic about it. Some people wanted to see more ‘naach-gana’ and maybe a color film. A lady illustrated how such movies can teach the children about the experiences and plights of the hard-labour their parents are absorbed in while also initiating them in the good virtues of life: she cited the character of Kanhaiya as an example. We thanked all the attendees for the support and left with the promise of returning soon - with more films.